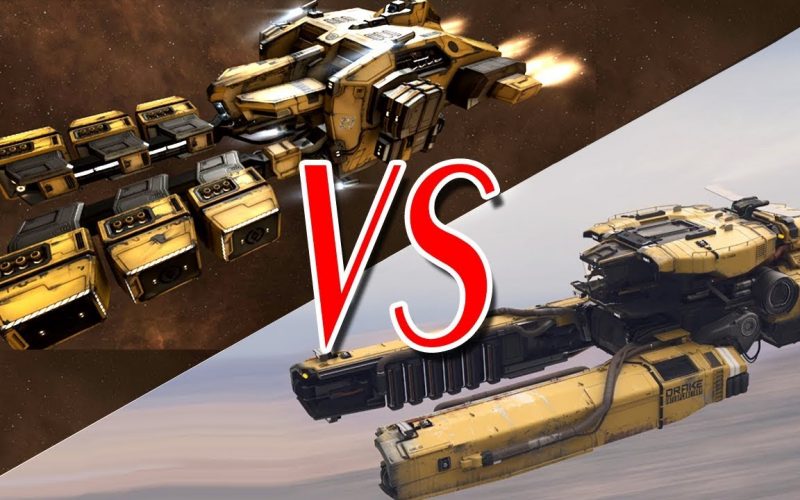 The Vulture bears more than a passing similarity to the Eve Venture.

When it started I made a brief comment on the Eve Reddit about these two communities being about as different as 4chan and Tumblr.
It appears that 24 hours later that comment was fairly apt because SC Reddit got more triggered than a eight gendered furry-kin leaving their basement and the Eve Reddit found a new trolling fucktoy.

I’m not going to waste the effort documenting everything but things basically start with CCP saying “Imitation is the sincerest form of flattery” at CIG along with some other meme posts.

Now this being the Eve community there’s obviously going to be some trolling involved when you’re selling a ship for $100+ that looks fairly similar to an Eve ship and is for a game that is still sitting in the tech demo stages six years after being funded.
Not really too much more than what you’d expect happened there so far as I can tell, just a lot of poking fun at Star Citizen.
Shit would have been over with in a day, like that time a few months back when CIG got caught plagiarizing Eve nebulas in their promotional concept art.

Of course the SC Reddit did their typical thing whenever some insults their digital space /waifu, they went full Battle Retard by escalating the situation with the community that represents the closest meeting point of 4chan and space gaming.
First one of the SC Reddit admins dropped by to say Eve Reddit needed mods to stop people from direct linking to SC threads and was promptly told to pound sand, and then proceeded to reporting the Eve Reddit for brigading and started reporting members for brigading.
Brigading (forum wars) are banned on Reddit and can see Reddit communities being shut down but this really didn’t appear to an organized thing here, just a few Eve posters dropping by to take a dump on Star Citizen much like a few weeks back during the $27,000 package thing.

So 24 hours later you’ve got the SC Reddit covered in cringy posts about how the ship doesn’t look at all like the Venture.
Some sort of “joke comic” about how the ships don’t look similar due to sizes or CCP ripping off other Chris Roberts spaceships? I’m not nearly retarded enough to get it.
And some meme posts about how CIG really is really just copying older ideas from Wing Commander, that look nothing alike.
Along with post about where CIG actually got their inspiration from.
Along with comments sections full of snarky comments about Eve being dead and a shitty game, which I think is funny considering how dead SC is currently.

You’ve literally got SC missionaries going over to the Eve Reddit to explain to the heathens how they just don’t get all the reasons the Vulture is unique and Special.
I would suggest taking a moment to check the above thread just for the stickied and guilded comment, it’s not exactly politically correct but I’d say it summarizes the communities fairly well.

Meanwhile the front of the Eve Reddit is covered in memes:
Star Citizen gangsters getting too serious about game criticism.
A fairly good shitpost, sorta about how banning Eve Reddit users being about the only game SC Redditors have.  Oh and tons of posts about actual things going on in the actual game about actual space serious business. 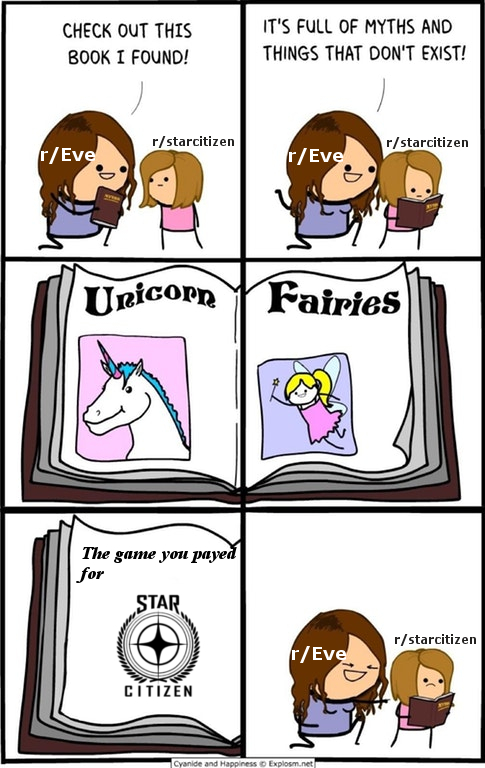 […] The Venture Vulture -Salvaging works by taking out modules by hand, then shooting the ship hull with hull mining beams and extracting salvage cubes to your cargo. Much gameplay innovation, moving gaming forward. -Can harvest a small ship on its own, needs a swarm of them to salvage a bigger ship. -Salvaging charges are apparently a thing to break apart a ship into smaller chunks. […]