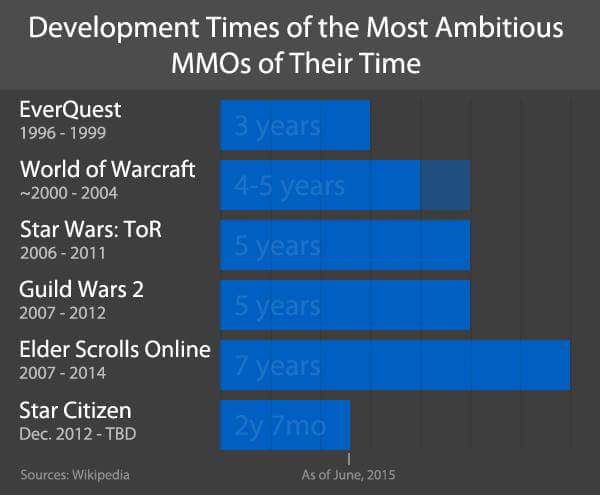 Recently there has been a rash of video game “news” and blog sites smashing the name of Cloud Imperium Games and Chris Roberts.  The chief complaint is that development of Star Citizen is taking too long.

They either don’t know they are wrong or are clearly writing clickbait.  That or they are subscribing or driving the wheel behind some crazy conspiracy theory.

Granted, Chris Roberts is terrible at estimating releases of various module tests.  It has been established.  Have you noticed that he has stopped providing precise release dates for milestones?  His estimates are much more generalized and vague.

His reasons are two-fold:  1) When developing a game or software lots of bugs present themselves and fixing a bug may create two other bugs or cause more bugs that existed previous to the initial bug fix to become apparent.  2) The community got all butt-hurt when CIG failed to meet the release date of the test because of reason #1.

Star Citizen didn’t really begin development until late 2012.  Most agree that October 2012 is a decent timeframe to recognize as the initiation of full-time development.  Yes, there was some development done as early as 2011, but it was all very basic – enough to produce the video we all watched in October 2012 when the kickstarter began.   Basic modeling, basic texturing, basic animations – all stuff the full-time studio CIG has now could knock out in 1-2 weeks.

So, by my math, we are currently at 2 years and 9 months of development time so far for Star Citizen… a very ambitious MMO at best.  Sounds like a long time to develop such a game.

But it really isn’t.

Let’s look at some other very ambitious MMOs.

Some of the titles above arguably continued development after the release date.

As you can easily see… development time of ambitious MMOs has been creeping up through the years.  This is easily attributed to progressively advanced game features and mechanics, considerably more complex textures, animations, graphics and models and greater depth of content.

Considering we haven’t even reached the halfway mark for the amount of time it took to develop The Elder Scrolls Online or the fact that Everquest took longer to develop then we are currently at, we don’t have much to complain about.

A 2016 or 2017 release would put it on schedule with other ambitious MMOs.  And it has been said that development will continue after the release date because many of the funding goals are just to much to cram into the initial release or we’ll be waiting another 2-3 years for release on top of what we are already going to wait.

There are also a lot of people screaming about the amount of funds that CIG has to develop Star Citizen and they are asking why it isn’t speeding up development.  To explain that more developers doesn’t necessarily mean decreased development time.  With game development and many other jobs, there comes a point of diminishing returns when throwing more bodies at a project.

For example:  A second worker hammering a single nail into a board of wood doesn’t help and can often times hinder the completion of the task.  Zoom out a bit on that example:  a second worker could be used to hammer his own nails into wood elsewhere to help speed up the process however there may still be points where only a single worker can effectively work… such as in tight spaces where only a single worker can fit.

So considering all of the above with extra emphasis on the fact that Star Citizen hasn’t truly reached 3 years of development, I think we can all now agree that Star Citizen is still on schedule.  Some highly ambitious release dates for various TEST modules weren’t met but it isn’t the end of the world.