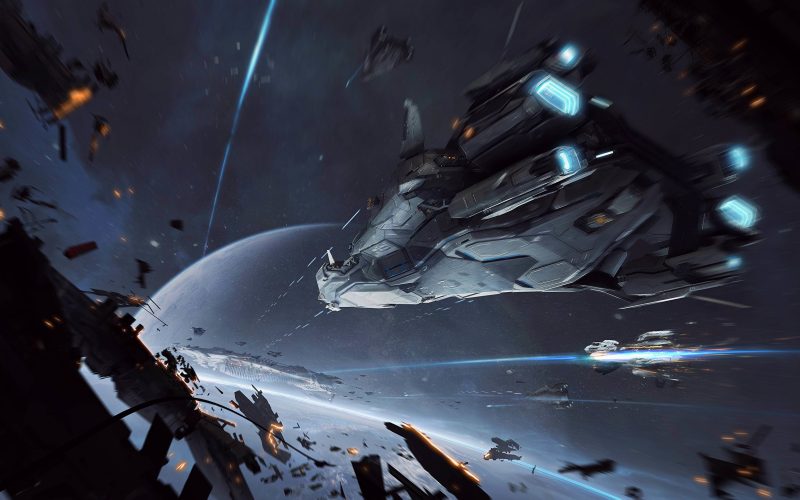 -Eventually it will be possible to overload a ship to the point where it can’t take off. Y’know, when CIG actually gets around to coding something like that…
-Some talk about sensors and detection. Watch the vid if you care, CIG’s been talking about this coming for years now with no results so far.
-CIG’s group system is going to have more features than any other group system in any other game ever, as soon as they get around to making it. Near future appears to be chat improvements. Hype overload, better pledge for a $500 spaceship.
-What’s CIG doing about the fairly massive backlog of early backer rewards and pledge bonus items they sold? Well CIG made a list, put them into the work system, and will get to them at some point in the future. Right after all those other years of backlogged work.

-When mining the special minable rocks will break into four different models as they are mined out. So like Rust, but in spaaaaaaace and with deadly space mining lazorz.
-CIG is working on new tech to replace this with something fancier. Phew, for a second there I thought they had just been wasting time since the original mining tech release was due in late 2016 or early 2017…
-As usual CIG is working on, and reworking, visuals for many things. Muh fidilities.
-Some new shots of planetary grassy plains environments. Looks nice but also looks like it’ll have the PUBG problem of grass not rendering past a few hundred meters.
-FPS AI is getting worked on but is having problems with things like running over a network, and being on a moving planet. So fairly fundamental stuff.
Item Kiosk / Inventory System
-Up until now shops have just had items on their shelf that you buy, CIG is now ready to make the amazing technological leap to having items exist in a…. database. Try not to shit yourself in excitement of this advanced technology.
-CIG’s game client will be able to execute such amazing functions as making queries to the database server, parsing that information, and even displaying it to the user.
-The database will be able to do such amazing functions as vary the entries in the tables based on results from clients and other functions that CIG may, or may not, code in the future. Amazing!
-This amazing new database will be able to take an item, decrease the stored unit count by one, and transfer the item to the players global item database.

-There’s a section on ships in this video but given that CIG can’t get the flight mechanics to feel very good in current build all the talk present about “nimble and responsive” the ship will be is more a talk of ambitions than practical current realities.

Reverse the Verse
It’s an hour of CIG circlejerking themselves about the amazing new inventory and kiosk system, I’m not wasting my time watching this and am just going to retype someone else’s summary.

-Functions such as buying multiple of the same item and search are currently beyond the technological limits of the system apparently and it will take some time for CIG to develop “add to cart” technology.
-Player inventory items are not bound to any location but are just put into a global inventory that can be pulled out from anywhere.
-Buying items from the NPCs that stand around uselessly is being considered for the future.
-There are no plans for handling of “rare gear” via shops. This undercuts one of the original premises of making it worth players time to visit shops.
-Sending ship equipment to a ships cargo is an option for future consideration, so you won’t be able to buy gear and then fly it to a friend who then equips it to their ship for the foreseeable future.
-You will be able to use your wrist computer to buy items from the area near the shop as an alternative, in case all the terminal are occupied.

-3.2-
-Remotely operated vehicle turrets is marked as complete, manned turrets on vehicles has started its own separate development now.
-Group systems, group warp, and ship persistence all moved forward by about 30% this week.
-Small movements in other areas.

-3.3-
-Minor progress, like in the 5% region, on a few things like networking, item spawning revisions, and other major key techs.
-Some ships slid backwards in progress as more items were added to the tasks list.

TL;DR
Take any expectations you had for this year and set them even lower.

Six years into the project CIG is developing the technologies to support the game and they’re developing them to the level of a first year university computer sciences project. Ok, maybe second year if you’re feeling a bit more generous.
As usual the visuals of the game continue to see improvement so you’ll be able to make great “Star Citizen is Amazing” videos for the Youtubes but practical systems that actually support or even take advantage of the “fidelity” that Star Citizen is supposed to offer are planned for some point in the future.

Tags: Around the Verse, Calling All Devs, Production Schedule Update, Reverse the Verse