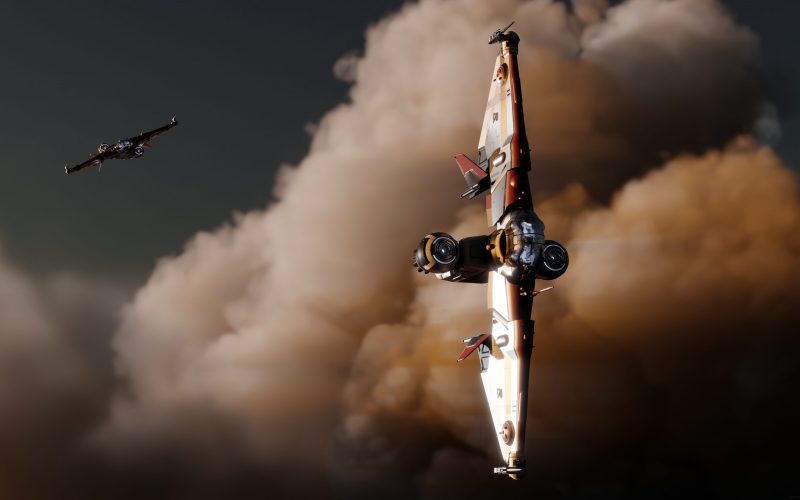 This question comes up quite a bit across most communities which commonly discuss Star Citizen and Squadron 42. For some it is a joke; others a serious inquiry. Deep down inside many of us desire to have the actual answer.

I don’t claim to have the answer but we can do some educated estimations based on information we have from CIG as well as insightful analysis conducted by some of the better members of the Star Citizen/Squadron 42 global community.

It’s a messy graph but it really shows us the sheer momentum and volume of the Squadron 42 project. The bottom line here is there are a TON of tasks being completed at a pretty rapid rate.

Based on Electr0freak’s analysis as of March 6th, 2020 Squadron 42 was 79.9% complete. This is based on the number of tasks completed presented via the roadmap. Granted the roadmap is likely missing any tasks or items which could act as a spoiler so that calculated percentage is likely a tad higher than it should be but likely not by much.

Projecting this analysis further we have to understand that the Squadron 42 roadmap was “created” on December 21st, 2018 and the Squadron 42 beta test was scheduled for the end of Q2 2020, which is June 30th, 2020. August 30th, 2019 Zyloh-CIG announced a 12 week delay due to the implementation of staggered development. This delay pushed the Squadron 42 beta back to Q3 2020. That’s roughly 21 months of development time. At month 15, it had completed 79.9% of the tasks or 1,792 tasks completed out of 2,243 total. That’s 451 tasks remaining. If they keep up the same rate of work of 119-120 tasks per month (depending how you want to round) that is 3.7 months of development remaining. This gives the team an extra 3 months for difficult tasks, polishing, or delays in their schedule assuming the same rate of development. With this projection Squadron 42’s beta is roughly on schedule to hit an Alpha test by the end of Q2 2020.

The Squadron 42 video which was rumored to be released during Invictus Week 2950 has been delayed and we do not have a release date. The cited reasons are that it wasn’t ready for the eyes of the public based on an internal review and is currently undergoing a revision. There hasn’t been much more on the status since the video’s delay announcement.

There really hasn’t been much on the status of Squadron 42 since March to be completely honest. Historically CIG has been quiet when they experience delays. The hangar module release saw it but most do not remember. Arena Commander’s release had one of the biggest hype trains surrounding it I had ever seen in the Star Citizen community and it was delayed nearly 2 months. CIG was quiet up until release of Arena Commander. They have been quiet about salvage game play up until recently. The idea I’m trying to convey is that CIG clams up when they have bad news and they have clammed up about both the Squadron 42 video and the status of Squadron 42’s development progress so they likely have some sort of delay.

With that in mind, I expect Squadron 42’s beta test to be delayed by roughly one quarter… so if my projection is correct I’m expecting we will see/hear about Squadron 42’s beta no later than September 30th, 2020. Considering the 12-week delay mentioned August 2020 I’m thinking a beta test launch of Q4 2020. We will likely see the Squadron 42 video well before that date.

Now CIG has been really careful to not release any information which could spoil Squadron 42’s content or story line. We know a few content pieces and the overall story of the single player campaign but we know nothing about what happens in that story line. The beta test may not be playable like the ongoing Star Citizen alpha test is. It may be released to a very small group of closed beta testers under an NDA like we see with the Evocati test group. The general player population may not get their hands on Squadron 42 until release. We will definitely hear something about it, publicly, before release though.

The thing to really look out for is marketing for Squadron 42 to ramp up to audiences that may not know about it. If you are a backer of the game and frequent the Star Citizen communities then you may not see the targeted advertising depending on your online privacy efforts. Once the promotional material starts flooding, you know we are at the point where Squadron 42 is feature complete.

Regardless of what happens, it should be an exciting year for Star Citizen fans. The past 8 years have been one hell of a ride, one for the history books about game development.

Fly safe and I’ll see you in the verse.

What are your thoughts about Squadron 42? What is your estimate on release of the Squadron 42 beta and why? Let us know in the comments below!