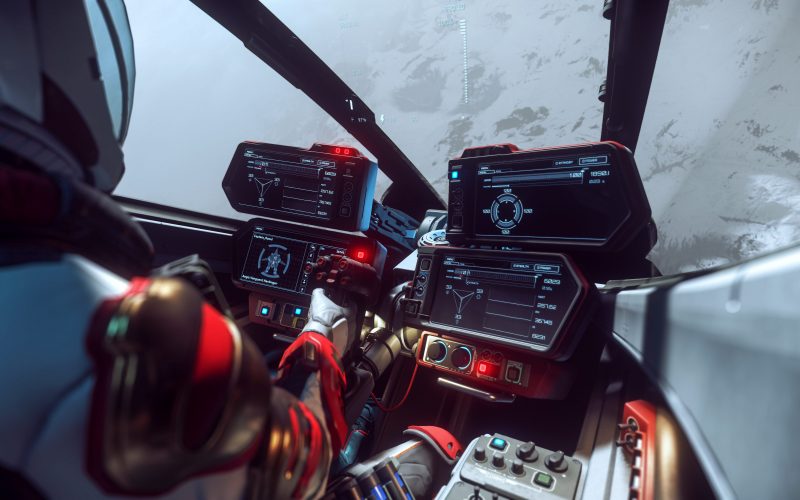 The current build is under NDA
Please monitor etf-megachat in spectrum for updates and testing instructions.

We will be monitoring this patch for stability tonight and may take down the servers if it proves to not be stable enough.

New Features
Characters
MobiGlas Variants
Adding the initial implementation of MobiGlas Variants which gives the player the ability to switch out their MobiGlas for another one with various colours. Players will be able to purchase these in game at the new Factory Line shop in New Babbage on microTech.

AI
Cover Usage V1
Expanding the tactic selection for the NPC-Human Combat to analyze the environment and detect, in absence of full cover, possible positions where they can engage enemies without being fully exposed to them. This includes objects such as small crates, which could potentially provide partial cover.

Gameplay
Body Dragging
Adding the initial functionality to allow players to interact with dead and unconscious characters, and move them. Whilst an actor is dragging they can equip, use and holster 1-handed weapons, i.e. pistols and knives (the dragging character holds onto the victim with their left hand, leaving the right hand free).

Thruster Efficiency Curves, Jerk, and Aerodynamics
Thruster efficiency curves drastically change the way thrusters work in differing atmospheres. In atmospheres our thrusters now lose efficiency and become much weaker. This is dependent on the ship and the thruster type to some degree, but ships are now much weaker when in atmospheres and cannot fly in the maneuverable way they used to.

Jerk – This is a core change to how ships move, both in space and in atmosphere that makes them much smoother and feel more weighty. Jerk is a measure how quickly the ship’s acceleration changes, and previously it was infinite. Now it’s a finite quantity that means thrusters do not respond immediately to changes in acceleration. Expect weightier feeling ships but with similar levels of maneuverability

Aerodynamics – Ships now have individually simulated aerodynamics surfaces that contribute various little forces to the motion of the ship. The result is both much more realistic and enjoyable to fly, and a significantly more detailed simulation. Expect lots of subtle, unique flight characteristics per ship that give them a lot more character. Ships with wings are now able to stall, do level turns, lose speed in tight turns, and various fancy aerodynamic features. The aerodynamic interaction with wind is now more details and expect wind to push and pull on ships in more complex ways. Ship aerodynamics will now change as you switch between configurations. Breakable parts now affect the aerodynamics, so break off a wing and the ship will not fly straight anymore.

High Speed Combat
Ship systems will now suffer the consequences of traveling at high speed, restricting some of the options that players will have at maximum velocity that will push players into engagement at lower speeds. When flying above SCM speeds, weapon accuracy, gimbal assist speed, and missile lock speed will be negatively affected. While you will still be able to lock onto a target for missiles above SCM, missile firing can now only occur while flying below SCM speed.

Added ship paints to in game shops.
Adding in the initial implementation of game purchasable ship paints to shops in the ‘verse. These are purchased with in game aUEC from Dumper’s Depot and Omega Pro shops and can be applied using the ship loadout manager in your MobiGlas. This first release will only have shops sell the Invictus 2950 paints for a small selection of ships.

Weapons and Items
New FPS Weapon: LBCO Atzkav Sniper rifle
The Atzkav is a unique precision sniper rifle from Lightning Bolt Co. Once the charging handle is engaged, it accurately fires a charged electron to deal significant energy damage that spreads to nearby conductive targets. This special pulse effect also leaves a residual charge in the strike area that increases damage delivered by subsequent electron shots. Alongside the rifle’s special firing capabilities, the Atzkav is best known for its distinct barrel that crackles with energy when powering its next shot. Currently, this can be acquired at Skutters in GrimHex.

New FPS Weapon: Lightning Bolt Co. Yubarev Electron Pistol
Engineering excellence only scratches the surface of the distinct Yubarev pistol. Former merc turned weapon manufacturing mogul Irina Arkady oversaw every aspect of the weapon, imbuing it with power, practicality, and panache. Featuring a classic woodgrain grip and cutting edge barrel design, the Yubarev fires a charged electron shot that impacts not only your target, amplifying the charge with each hit, but can spread to additional conductive targets in range.

New FPS Weapon: Gemini C54 Ballistic SMG
Easy to handle and a beauty to behold with its purple accented styling, the C54 is a sleek and precisely balanced SMG from Gemini. Its lightweight polymer frame and ergonomic design makes it ideal for close quarter engagements. The C54 is capable of firing 10mm rounds on full auto to provide maximum support and target saturation to ensure that any engagement ends quick.

Core Tech
Day/Night temperature changes on planets
We are introducing a new mechanic to planets that causes the temperature to rise and fall with the day and night cycle. This means that planets should be warmer during the day and cooler during the night.
Feature Updates

Locations
GrimHex V2
These updates are to make GrimHEX a complete landing zone. The main changes include new location-branded utilitarian hangars accessible by the main hub. This includes 2 large and 1 extra-large hangar to allow larger ships to land.

New Babbage Shop Additions
Introducing new shops to New Babbage such as a novelty Kiosk in the New Babbage spaceport interior which will sell souvenirs and knick-knacks. Also coming to the spaceport is The Factory Line, a flagship store for microTech, which sells their top of the line products, such as mobiGlas variants, simpods, a new microTech hacking chip, and other various computer related items.

Planet Re-Drop – Height maps quality update
Updates made to all the heightmaps used on planets and moons to fully take advantage of their higher resolution. This will mean more detail can be utilized during the painting process.

Ocean Shader Improvements
Added support for in-game oceans to react to flares and local lights using screen-space and cubemap reflection. Upgraded shading to include a Fresnel component and Sub-surface scattering term, and new shader features, to enhance the realism of oceans with improved refraction and additional detail layers. Added ability for ocean to react to wind conditions to increase or decrease wave turbulence.

Quantanium mineable unique visual material
This is a visual change to Quantanium nodes to give it a new, unique material that will differentiate it from other mineables.

Added additional LODs to Port Olisar landing pads and rings to help with assets popping in and out at a distance.

Gameplay
Ship Hud Rework
Rebuilding our ship HUDs to use the new building blocks UI system ahead of further redesigning the look of the UI. This includes updates to the design of TVI (True Vector Indicator) and reworked center targeting UI. Note: This change is currently not for ground vehicles will come in a future update.

Turret Usability Improvements
In order to improve the general combat and turret experience in SC a number of changes have been done. This is the first iteration and we plan to continue to improve upon these in the future. Currently some of the UI is placeholder.

Turrets now have a fixed assist system, using weapon convergence to nudge weapons toward the target, while still rewarding precise aim and area targeting. In addition, we added a modifier for how much the acceleration of a target is taken into account for PIP prediction. We now update the PIP purely on the velocity which gives us a much more stable firing solution and decreases the effects network jitter of juking behavior.

Turret UI now shows specific status labels so that there is no uncertainty what the turret is doing including VJoy mode, turret rotation, gimbal borders, and aim quality. This also exists on remote turrets.

Updated ship control settings
We have made updates to the default ESP settings. ESP radius and dampening effect is now customizable in the options menu. We have added additional v-joy visibility and functionality settings to the option menu.

Prisons V2
Updating Commissary Vending Machines and Items as well as NPC AI Guard behavior. We have also added missions to repair broken oxygen dispensers for merits. These missions will trigger periodically as oxygen kiosks in the prison caves will break over time and signal that they in need of repairs. When a player accepts and completes the mission they will be rewarded with merits.

Updates to Star Marine scoring and REC conversion
Score for kills in Star Marine has been doubled to 200. Increased score limit for Elimination to 5000 (up from 3000), and adjusted the score to REC conversion due to these changes.
Moved the Personal Inner Thought back and page arrows to the middle of the menu and added a dark background behind the wheel
Updated all radars and pings to be able to detect mineable entities

Ships and Vehicles
Variable armor values have returned to ships
We have setup some minor armor variation to ships. Ships designed to take punishment will now have slightly higher damage resistance (ex. Cutlass Blue). Stealthier ships will have signature reduction in armor, at the cost of some damage resistances.

Major Bug Fixes
Glass in the Aeroview hangar should no longer be heavily obscured by scratches when looking out of the upper room.
Fixed Mustangs being able to equip S2 quantum drives.
Fixed audio element of Carrack thrusters so it should no longer be excessively loud to players inside the ship.
AI should no longer regularly go into a “relaxed” aim stance during combat.
Fixed ADS positions on FPS weapons to be centred so that crosshairs line up to bullet firing.

I’m looking forward to the turret changes the most. I feel like it will make multi-crew gameplay more feasible as currently it usually makes more sense to fly multiple ships than to be a Gunner.

What about everyone else?

[…] Citizen Alpha 3.10.0 is just around the corner.. so close that it went out to Evocati for testing yesterday. We saw a 7% jump from last week and are now sitting at 90% complete with the lowest percentage […]